I don't know if today has been a good or bad day. It's an ongoing battle ... but that's part of the reason for being here.

We've had 5 new guys coming in since we arrived. The latest arrived two days ago and is withdrawing from heroin.

Each drug or addiction has it's own withdrawal symptoms. Ketamime withdrawal for example can cause severe pain in the kidneys and cause the feeling of needing to go to the loo often. Heroin has probably one of the most painful withdrawals though, as the whole body goes into a kind of shock. The new guy is struggling physically and as a result wants to leave. Unfortunately, despite knowing Jesus, he's is not praying or asking for His help. Three different guys who have got through heroin withdrawal with only prayer have come to encourage him ... but he's rather closed at this point.

The program for the day has gone out the window! Much prayer though!

And now at the close of the day God is good. The battle seems to have been won ... for today. The new guy has had some sleep after 2 nights of not sleeping. Please intercede though as without the person being willing to ask for and accept Jesus help it tends to be harder for them.

Never a dull moment :) ... whats more one of the guys in the house broke his arm playing football yesterday (reminds me of 28 years ago if you are reading Mr Woods!). Jo went to the hospital with one of the boys and nearly got caught in a typhoon! Fortunately it didn't get too bad.

Perhaps its a bit early to say what a typical day looks like ... but here goes anyway.

To the main part of the house:

Everyone else gets up a little later but a helper needs to be around from 7. It's a good time to have a quiet time and read the bible.

This used to be a house with some of the guys who've been in the program for a while. That has means the guys have a certain amount of autonomy. But since we've been here they have taken in 3 'new boys' and things are not normal (at least for the guys). We all have a lot of 'new boy duties' where someone is with each of the new guys 24 hours a day for 10 days. During this time we meet every physical need the 'new boys' may have, food - sleep - even massage, and also spiritual need by praying for them continually. There are only 12 of us in the house apart from the 'new boys' so 24 hour care means we're all a bit stretched and a bit tired. And some people get up a little later than normal.

By 8:15 though they'll have breakfast together (not so many of them perhaps because some will be sleeping in after a night dury) and I've already had some cereal (a little bit of normality! none of us get on with Chinese breakfasts).

8:30 till 9 they have a quiet time and then a worship meeting at 9:30. Trying very hard to learn the language so I can follow.

10:30 is usually cleaning the house or work around the compound ... so far for me that's meant anything from fixing the gate struts to clearing monsoon drains with the guys. Whatever it is, I have to change beforehand as I am drenched in sweat within a minute of doing any activity.

Lunch at 12:30 ... nothing special to report except that Samuel isn't enjoying the 'fair' as much as Reuben so we're going to start having 3 western lunches for the boys a week. The food isn't like your local Chinese take away and at the moment seems to involve the tips of chicken wings as it's cheap - Reuben seems to love this, Samuel not at all).

After lunch til about 4 is work again. After that some physical recreation. The pool is great and the boys are loving that ... but Reuben has also had great delight playing as an extra on Daddy's team at 5 aside football (he's really got some skill and is able to take the adults on ... even if they are being kind) and Samuel is really enjoying badminton with Mummy! I think we may all be getting fitter!

ALL of these activities are opportunities to relate with the guys, pray with them encourage them (if they speak good enough English), or just make friends and learn Cantonese (our top and ongoing challenge). What is amazing is how humor doesn't have so many language barriers!

The evening is then supper at 6:30 followed by a bible study/meeting.

There are variations on this theme. For example: one evening a week they get to watch a film, and one of the guys has learnt to be a rather a good cake maker and he teaches everyone else instead of work one afternoon.

Jo and the boys days are quite different to mine but I'll let Jo write about that next time.

If you pray then please pray for: 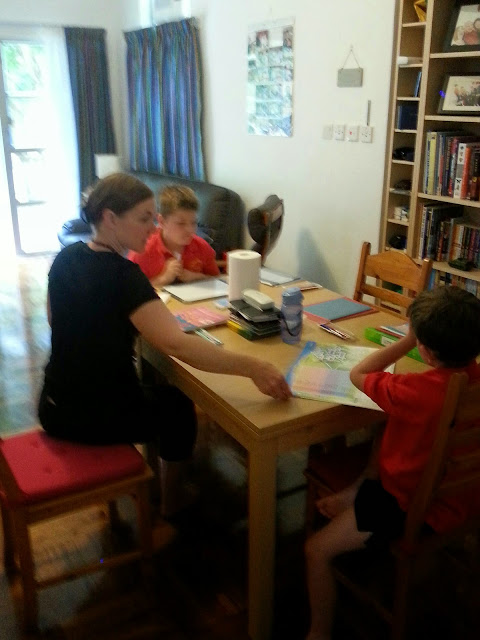